Everyone did Jefferson King's bidding. Except the folks in a certain Irish village he'd "bought" for his latest production. And when the movie mogul arrived in town, he discovered why everyone had turned against him. He'd gotten one of their own pregnant.

True, it looked as though he'd been avoiding Maura Donohue's phone calls; he was a busy billionaire. It didn't have anything to do with their night of passion…one he couldn't erase from his memory. Naturally he'd give the expectant mother a wedding worthy of a King's bride. But Maura wouldn't enter a marriage without love…and Jefferson wouldn't bend to that demand.
Posted by Barb at 11:31 AM No comments:

It was supposed to be a last meeting to sign divorce papers. Then passion overtook them and Maggie King walked away with more than just a legal decree—she was pregnant with the child Justice King had always refused to give her. A fact she would never dare reveal to him.

But when circumstances forced her back to the King ranch, she could hide her secret no longer. Justice had a son, one he desperately wanted to deny was his own. Because admitting the boy to be his blood kin would mean he'd made the biggest mistake of his life.
Posted by Barb at 12:40 PM No comments:

For three years she'd haunted his dreams. And the memory of that heated anonymous night sent tycoon Jesse King back to Morgan Beach, California, determined to find her. He would have his mystery woman once more—a King never lost.

Bella Cruz was far from happy to see Jesse again. The millionaire had swept her off her feet, then left, and now he didn't even recognize her! And since he was her new landlord, she couldn't avoid him. Heaven help her if he discovered her identity, for she'd never be able to deny the power of King's seduction….
Posted by Barb at 8:38 PM No comments: 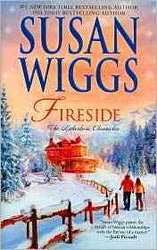 Baseball hopeful Bo Crutcher is about to get his shot at the majors. That is, until life throws him a curveball. When AJ, the son he's never met, lands on his doorstep, Bo's life becomes a whole new ball game. He needs help—fast.

Enter Kimberly van Dorn. Hired to smooth Bo's rough exterior for the media, she expects the kind of shallow pro athlete she's used to handling. But Bo is willing to sacrifice everything for his vulnerable son. Kim can train him to hit a home run with the press, but over a breathtaking winter on frozen Willow Lake, she realizes he has far more to teach her about the game of life…and putting love first.
Posted by Barb at 11:28 AM No comments:

Dreams of Desire by Cheryl Holt 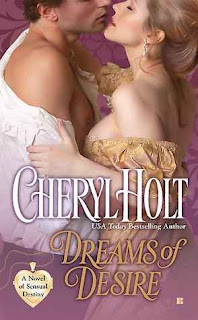 Every instinct is telling Lily Lambert to run from Penworth Hall as fast as she can, but there is something about handsome, daunting John Middleton, Earl of Penworth, that keeps her in his employ. It certainly isn't his twin wards, evil little vixens who will do anything in their power to have Lily fired as their chaperone.
And the love potion isn't helping.

Lily bought it in desperation, hoping to marry so she could escape her lot in life as governess and companion to the spoiled offspring of the nobility. On a voyage to John's Scottish estate, Lily sips the potion while gazing at the ship's captain, only to come face-to-face with John, who seems to be instantly smitten. Now, in the locked rooms and dark alcoves of his Scottish castle, John traps Lily in moment of impropriety, bringing a flush to her fair cheeks and igniting an indecent longing in her body. Only time will tell if the potion's impossible promise will ruin Lily — or set her free...
Posted by Barb at 8:12 PM No comments: